Tuned mass dampers (TMDs) and vibration absorbers respectively are designed for the reduction of low- and high frequency vibrations in machines, buildings and other structures.

In wind turbines, for example, 500kg-TMDs are used against structure-borne noise in the frequency range of 20Hz–600Hz. On the other hand, pendulum based TMDs with 15t mass prevent large bending vibrations of towers in the range of 0,15Hz–1,5Hz. In addition, rotational vibrations in rotatory machines like pumps, gear boxes and generator require torsional TMDs to prevent rotatory vibrations of the drivetrain. The TMDs mentioned above are based on the same principle but in different directions with different sizes and at different frequencies.

Passive tuned mass dampers do not require any energy supply, in contrast to adaptive and active TMDs (see below).

The principle of a passive tuned mass dampers

A tuned mass damper is a damped mass-spring-system (see fig. 2) that is attached to a vibrating main system. The behaviour of the TMD mass in the six possible directions and rotations can be adjusted with springs and dampers. In doing so the TMD can reduce vibrations in various directions and frequencies with just one mass. 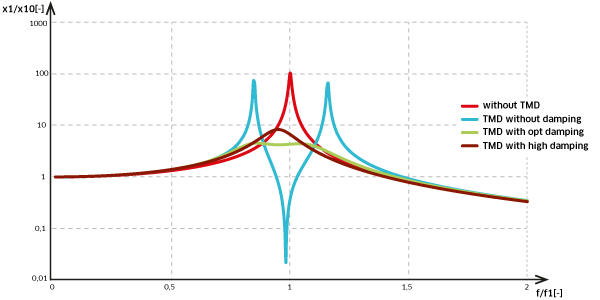 Fig. 1: Impact of a mass-spring-system by a passive TMD 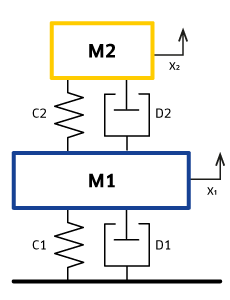 The behaviour of a tuned mass damper can easily be illustrated with a two-mass-spring-damper-system (see fig. 2). The schematic diagram (fig. 1) shows the calculated movement of the main system (M1) with respect to the frequency of the excitation force for different properties of the TMD (M2). Depending on the set of TMD-parameters the vibrations are reduced by an order of magnitude. For the case of low damping D2 (blue curve in the diagram, fig. 1) the disturbing eigenmode is cancelled but two new disturbances right and left to the original one arise that have a similar vibration level. By increasing the damping D2 of the TMD an optimum can be reached (green curve in the diagram, fig. 1) where the disturbing vibration of the main system can be calmed in a broad frequency range. Adapting the TMD mass and TMD spring stiffness allows a further decrease of vibration level or shifting the curve, respectively.

The TMD-principle applies two vibrations of any frequency. So, ESM has passive TMDs for frequencies of 0,15Hz as well as for 600Hz within the portfolio. Also, the direction of interest can vary. ESM’s rolling mass dampers, for example, acts in one bending direction whereas the pendulum based TMD acts in a plane. The tuneable TMD against noise can work in all lateral directions whereas the torsional TMD applies to the rotatory degree of freedom. For all cases the tow-mass model can be applied.

The features of an adaptive tuned mass damper

Adaptive tuned mass dampers change their damping or spring stiffness through feedback and control to achieve a better performance. To this end, input signals like rotational speed, path or other signals are feed into the system and actuators change the parameters accordingly. The very good performance of the undamped TMD for example (see fig. 3 and fig. 4) can be used in a large frequency range of excitation if the spring stiffness is changed appropriately. For TMDs in towers, on the other hand, the tuning of damping can help to increase performance under special operating conditions. 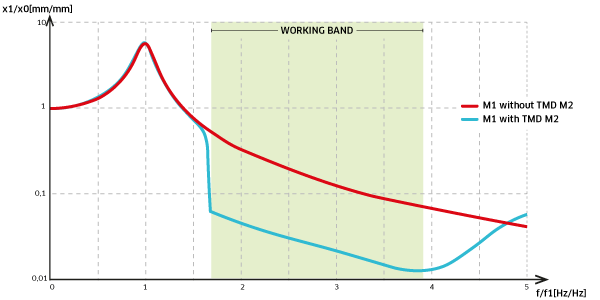 Fig. 3: Impact of a mass-spring-system by an adaptive TMD 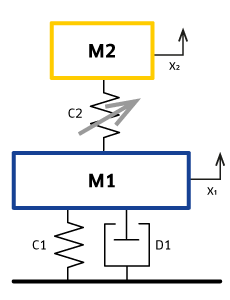 Fig. 4: Mass-spring-system by an adaptive TMD

Active tuned mass dampers are systems that introduce forces into the main system in order to counteract the excitation forces. They consist of actuator, power electronic, sensor system and control unit. The actuator can be based on anelectromagnetic or anelectrodynamic principle. More robust unbalance motors can also be used. The counteracting force needs to be controlled in direction, frequency, phase and amplitude to achieve the desired performance. To this end, all parts of the active vibration absorber need to befully coupled and calibrated to each other.

Active TMDs need less mass than other TMDs, however they have high energy requirements and will be completely ineffective in the event of a power failure.